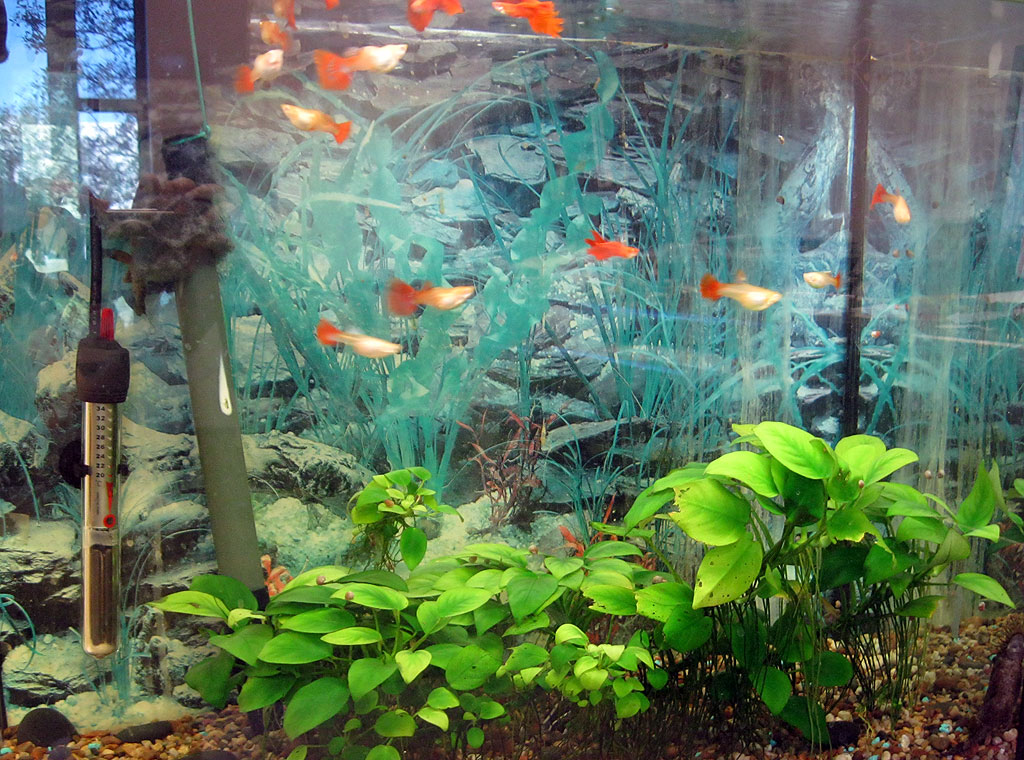 There are many articles on biological filtration in aquariums. I myself have seen dozens of similar descriptions, and none of them convinced me. All these articles are either frighteningly "scientific", or do not cover all aspects of the topic. I personally spoke to many hobbyists who verbally are aware of the importance of understanding the nitrogen cycle in aquaria, but in reality they demonstrate a lack of understanding of key points of biofiltration. This is how the idea to write such article came into my mind. I aim to briefly describe the key points needed for understanding the essence of biofiltration, with detailed description of a real aquarium as a closed biosystem.

All aquarists understand that the water in an aquarium should be filtered and cleaned in some way. The majority believes that the term "filtering" means mechanical removal of particles from aquarium water. This is fundamentally wrong understanding of the problem. In half the cases aquarists (especially beginners) say: " Literally a couple of days ago I changed the water in the tank, and it still becomes foggy." Such an aquarist does not understand what is really going on in his aquarium, as well as the fact that even a complete water change will not help him to eliminate the problem.

Let's look at a regular aquarium that has a substrate, plants and fish. What processes take place in this tank? Fish eat food and release products of its vital activity into water. Such product, in particular, is ammonia NH3. Ammonia is toxic to aquarium inhabitants, and its accumulation in the water is dangerous to health and life of aquarium inhabitants. Here begins the first stage of the transformation of toxic ammonia into less toxic compounds – namely, to nitrite (NO2). This conversion is done by heterotrophic bacteria Nitrosomonas that inhabit the substrate and filter material. In the next oxidation step nitrites are converted to less toxic nitrates (NO3) by nitrifying bacteria Nitrospira. Moderate amounts of nitrate are easily tolerated by fish and even by quite demanding to water quality invertebrates – snails or shrimp. Nitrates are nothing other than nitrogen fertilizers, and, accordingly, are absorbed by algae and higher plants. All transformations go with significant absorption of dissolved oxygen, so the active aeration in a healthy aquarium is simply necessary.

Thus, plants actively absorb nitrates, and with adequate lighting and dissolved carbon dioxide - the necessary components of photosynthesis - are growing rapidly. Water chemistry in the tank, i.e. its quality, can be judged indirectly through grow rate of higher plants. However, it should be remembered that the feeding of underwater plants consists of two parts: the presence of nutrients (nitrates) and photosynthesis. For example, in a tank with active aeration plants' grow rate may be low even at high nitrate concentration - for the reason that active aeration removes all dissolved carbon dioxide, and its amount is simply not enough for photosynthesis, even  at sufficient lighting. I deliberately keep floating plants, like duckweed or frogbits, in aquariums that require high water quality. The leaves of these plants stay in contact with the atmosphere, and therefore do not suffer of shortage of carbon dioxide. If duckweed or frogbits feel not the best way in such aquarium, this means that they do not have enough nitrates for fast grow rate. Usually duckweed grows well in aquariums with fish, while it stays barely alive in shrimp aquariums, as shrimp produce negligible amounts of waste products compared to fish. 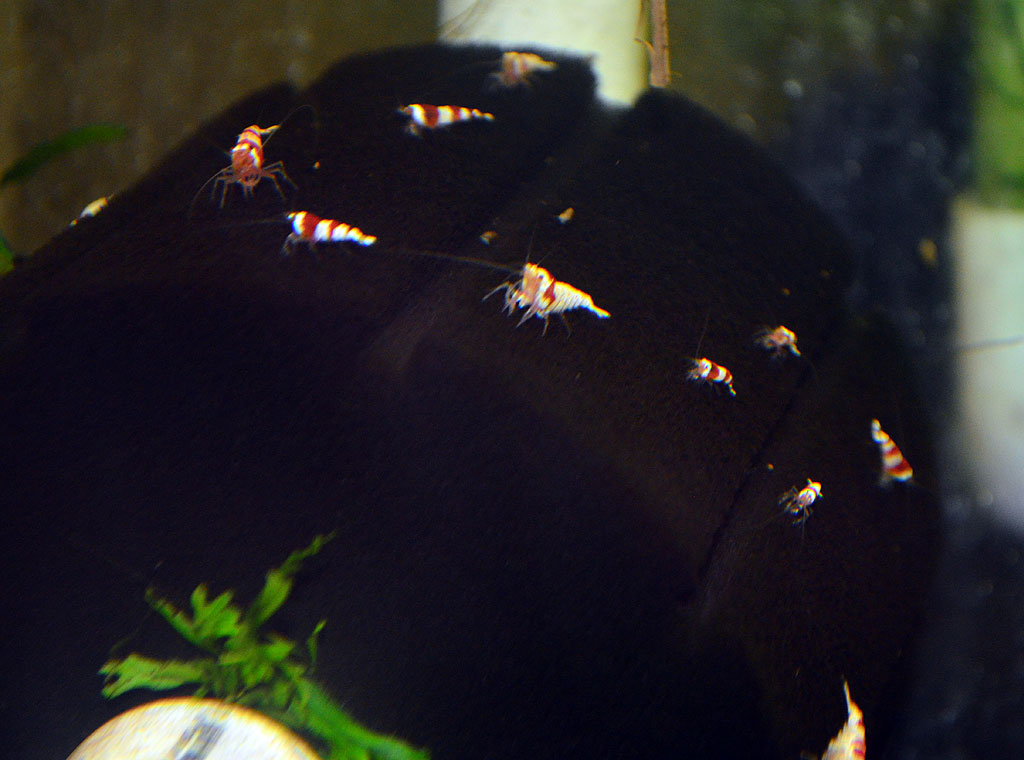 Where do the bacteria that play so important role in biological processes live in the tank? Of course, they inhabit sponge filters. Sponge is a perfect medium for bacterial growth. Such a filter has a huge surface area inhabited by bacteria. Water that flows through the sponge leaves mechanical particles and dissolved substances like ammonia and nitrite. Are aquarium filters the only medium that helps to establish biological equilibrium in the aquarium? Even experienced aquarists may think this is true. In fact, an aquarium with established biological equilibrium is a biological filter itself. Nitrifying bacteria colonize the substrate, and all surfaces inside the aquarium, i.e. driftwood, leaves, plants, and aquarium walls. One should not forget that green algae covering the biological surface of the aquarium along with bacteria are plants too, and so, they do consume nitrates.

Aquarium substrate should be discussed separately. The substrate can be different: neutral, consisting of quartz pebbles or other inert materials, or biologically active, such as ADA Aquasoil or Fluval Shrimp & Plants Stratum. Neutral gravel, as it becomes "dirty" of fish and snails wastes, also contains a significant amount of beneficial bacteria, but these amounts are not comparable with those that are present in the biologically active substrate. In fact, the entire volume of such substrate is a powerful biological filter actively participate in the creation of biological equilibrium in the aquarium; often it is equally important than large sponge filters.

A tip to aquarists that keep shrimp. Some leaf litter should be used in shrimp tanks. Leaves of many trees may be used in aquariums. I will not go into details on this point. Personally, I buy leaves of Indian almond tree Terminalia catappa from a seller in Singapore. Besides the fact that surface of dead leaves start to work as an additional biological filter, the leaves of this tree are bactericidal and contain tannins and humic acids. Shrimp prefer to stay on leaf surfaces constantly picking on biofilm that covers leaf surface. Leaves are completely consumed in a month or so, just a mesh of fine streaks is left; whole leaf pulp is eaten by shrimp. By the way, leaves play another very important role in a shrimp tank. During first several days of their life newborn shrimp cannot eat food suitable for adult shrimp. They feed exclusively on the biological film, so its presence becomes a matter of life and death for them. I have a positive experience with leaves of persimmon, oak, loquat, pear and other trees. Oak leaves are very dense and so they are eaten very slowly while leaves of persimmon or pear completely disappear in a month after being placed in aquarium.

I use sponge filters in my tanks. As mentioned, sponge is a perfect environment for development of beneficial bacteria. However, there are nuances even in such a simple matter. It seems to be simple: the filter works and eventually becomes filled with filtered out particles, and so requires some cleaning. However, 9 out of 10 aquarists wash the sponge filter until all the "dirt" is gone. This is a huge, especially if this is the only filter in the tank and aquarium inhabitants are demanding on the quality of water. I state that a dirty filter should be cleaned just slightly, until water easily goes through it. "Dirt" that fills sponge contains billions of beneficial bacteria that create biological equilibrium in aquariums. Thoroughly washing the filter we greatly disturb the equilibrium of the aquarium. The number of bacteria was exactly right to completely consume ammonia and nitrite produced by aquarium inhabitants. Once we have removed significant amount of bacteria involved in these processes, the equilibrium was unsettled. Fish and snails continue to produce ammonia that cannot be converted. Its concentration in the tank rises, but growth of bacteria capable deal with ammonia is behind. Cycling a tank takes a few weeks. If the tank is densely populated, if there is neutral or very clean substrate, if there are not enough living plants, such thorough cleaning can result in loss of aquarium inhabitants. To make cleaning of filters less affective, I use two sponge filters in each tank and never clean them at same time.

This is the reason why all changes in the tank should be done slowly, especially if the tank is densely inhabited. For instance, siphoning of gravel in my tank with Sulawesi shrimp takes me a month to complete. I clean just quarter of gravel at the time during water change, and next quarter is cleaned in a week. This way water chemistry is barely affected by my manipulations.

I would like to mention one more thing that surprised me more than once. Everyone knows that tap water is treated with chlorine or chloramine to kill bacteria in it. Thus it is well known that tap water has bactericidal properties. This knowledge does not prevent many people to fill a tank with tap water and immediately place a sponge filter taken from cycled aquarium in it to quickly establish the biological equilibrium in the tank by introducing a colony of beneficial bacteria. Obviously, all beneficial bacteria in the filter are killed by chlorine dissolved in the water before it is eliminated. This is true that placing a cycled filter speeds cycling up, but it should be done only after chlorine is gone. It takes a day or two depending on how intensely the tank is aerated. Also should be remembered that a colony from another tank will inevitably suffer a lot being placed in a new aquarium, as there is no food for it.

In conclusion, I would draw your attention to a little-known fact. Plants consume nitrates much more actively in slightly acidic to neutral water than in slightly alkaline. The processes of nitrification are much more active in alkaline water though. So, it can be expected that concentration of less toxic nitrates will be minimal at pH 6.5 to 7.0 while nitrite level may be much higher. Nitrifying bacteria do their job better at pH 7.2-7.6, and water is free of toxic substances in such aquarium. This is the acidity I support in my tanks. Indeed, plants grow slow at such conditions, as they are experiencing deficiency in nutrients. On the other hand, plants are not even obligatory component of a shrimp tank setup. I have a few very healthy tanks with no plants at all. Some plants cannot survive at such deficiency; others are not thriving, but feel acceptably. These are Java moss, Java fern, Hornwort, Najas, Hygrophila, Rotala, Pallia, Anubias nana and Barteri, Aponogeton “livebearer” and some others. There are some rooted undemanding plants that can survive shortage of nutrients, such as Carkscrew and Italian Val, and Dwarf Sagittaria.